↓
Home » Is the building preparation for airtightness test identical for every country?

Building preparation errors are probably the dominant source of uncertainty in an airtightness test. The reference testing protocol in Europe is described in ISO 9972, in the USA in ASTM 779-19, and in Canada in CGSB 149.10-2019. Nevertheless, ISO 9972 proposes 3 different methods (with different preparation requirements):

Many countries have developed specific guidelines to detail or adapt to the ISO 9972 requirements.

A study has been performed to compare building preparation rules for airtightness testing in 11 European countries [1]. Information has been collected through a questionnaire sent to TAAC (TightVent Airtightness Associations Committee) members [2]. It has been found that building preparation differs significantly from one country to another and that methods 1 and 2 described in the standard are either too detailed or insufficiently described to fit the specificities of each country. This has supported the creation of “method 3” in ISO 9972:2015 (which is one of the major changes compared to former EN 13829:2000). "Method 3" needs to be defined at the national level which allows to adapt the measured extent and the building preparation to the purpose and context of the test. More specifically, it allows each country:

The main obstacles to harmonize pressurization test methods between countries are:

Therefore, it is clear that building airtightness should not be compared between countries unless precaution is taken in the sample analyzed and in the interpretation of the results.

The figure below shows how 6 openings categorized as "other" in the standard are prepared in the countries asked in the above-mentioned study. It shows, for example, that in some countries the air exhaust of a clothes dryer will be left open while in others it will be sealed. 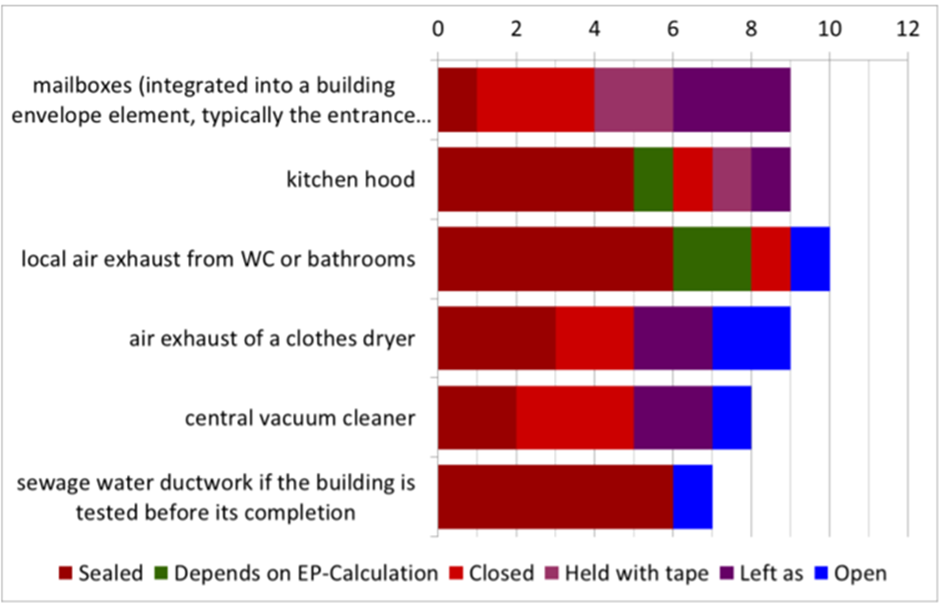